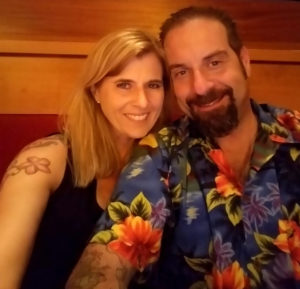 Former Phoenix Police Office Matthew Prutch recently took over ownership of Desert Car Care McQueen in Gilbert, pledging to build on the shop’s tradition as a family-owned local business with a focus on honest and quality service. The shop originally opened in December 2012 and has been a family-operated business from day one.

Matthew and his wife, Brady, purchased the shop from the Buschtetz family over the summer in 2017.

“Our mission at Desert Car Care McQueen is to treat all our customers like friends or family,” he said. “We pride ourselves on our integrity and honest dealings.”

Review after review of Desert Car Care McQueen mentions the honesty and hard work that Matthew and his team provide to all their customers.

His journey to owning an auto repair shop started when Matthew was a boy. He said his love of all things mechanical began in his father’s outdoor power equipment shop when he was child growing up in Oregon. He also fell in love with motorcycles and cars, and built several one-off motorcycles and cars before he was even old enough to drive. He also races motocross.

Matthew eventually became a journeyman mechanic and when he turned 16 got hired as a motorcycle mechanic in his hometown of Albany, Oregon. Matthew kept building on this knowledge of engines and mechanics, eventually becoming a full-time automotive technician specializing in Asian automobiles in nearby Salem, Oregon.

A move to the Las Vegas area in 1991 landed Matthew a job at a Bosch service repair shop where he repaired and maintained mostly import vehicles and rare exotics such as Lamborghinis and Ferraris.

In 1994 Matthew moved to Phoenix and joined the Phoenix Police Department. As an officer, he served in the Maryvale and South Mountain precincts. Despite his dedication to community service, Matthew still loved cars and engines. He kept working on cars and custom builds throughout his law enforcement career. On days off from the police force, Matthew would be in his home shop building custom cars or repairing cars for his many customers who appreciated his absolute honesty about repairs that were needed and repairs that could wait.

Matthew said he felt that the reputation that shop’s reputation for quality repairs and honesty was right in line with his own personal values and that of his family. Matthew, his wife Brady, and their two sons pledge their honesty in all dealings at Desert Car Care McQueen and would be honored to earn your trust in providing repairs and services to your vehicles.